UK Tax Return Statistics – The Good, The Bad and The Ugly

As the tax return deadline day 2019 draws closer (31st January), if you’re one of those who’re yet to file their self assessment – GoSimpleTax have put together some very interesting UK tax return statistics. Including the good, the bad and the ugly and leaving no stone unturned, here are some self assessment statistics from 2018 that are worthy of a mention. Take note from the bad examples and be sure that you’re submitting yours on time this year.

But before we delve deeper into last years data, let’s take a look at the situation for 2019 as we know it currently. 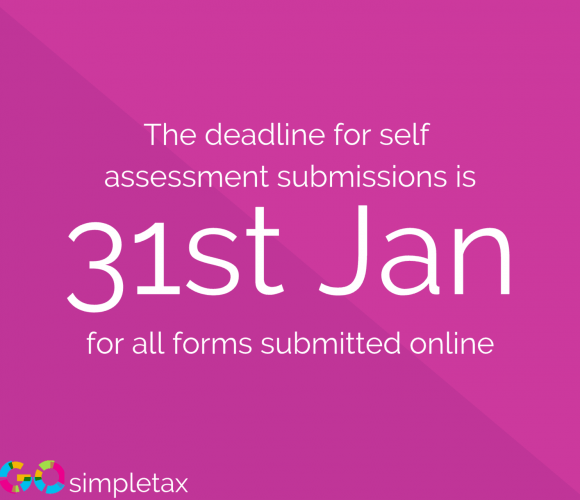 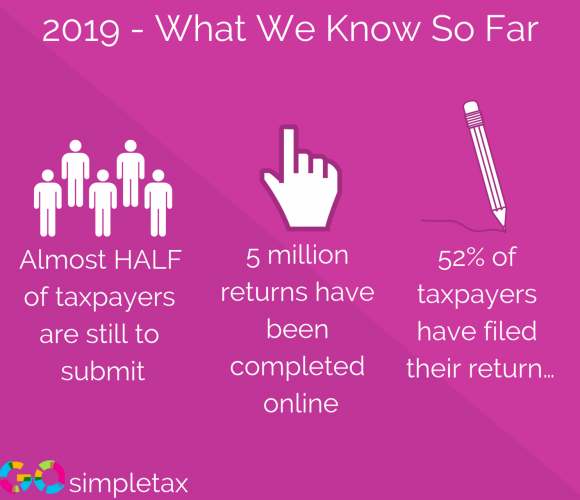 We’ve collected data from our GoSimpleTax software and compiled that with HMRC data to bring to you the tax return situation, as it stands in 2019. The deadline is approaching and the statistics that we’ve unveiled may surprise you with this in mind.

Almost HALF of taxpayers are still left to submit… HMRC released a statement on the 2nd of January this year entailing that they are still awaiting the return of a whopping 5.5 million self assessments. On January 23rd 2018, the governing body was still missing over 3 million filings, so let’s see how the stakes fair this year.

88%, or 5 MILLION returns were completed online…  Of that 52% that have already submitted their tax return, 88% – or rather 5 million taxpayers filed their self assessment online before the end of 2018. We suspect that this is a result of the new government initiative, Making Tax Digital (MTD), which aims to see all tax-related activity carried out digitally by 2020.

Financial Secretary to the Treasury, Mel Stride, said… “It is encouraging that around 52% of taxpayers have already completed their Self Assessment tax returns. With less than one month to go before the deadline, there are still many people that need to act now.” 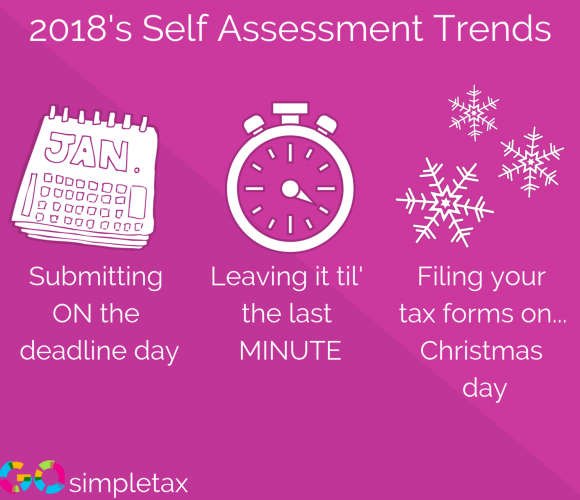 We collated the GoSimpleTax data from the self-assessments that were filed last year over the 2018 deadline and compiled that with HMRC data to bring to you a review of 2018’s tax return submission activity.

There’s something about the 31st January… It would seem that late tax return filings, however, are not a new trend. GoSimpleTax’s submission data revealed that a huge spike of the total self assessments were submitted ON the deadline day and submissions in the final hour were not uncommon either….

Leaving it til’ the last minute seems all the rage… funnily enough on the 31st January last year, the last submission for the day was entered at 23:59:43 – close call!  It was also reported that in 2018, 2 MILLION people were yet to complete their self assessment just one day before the deadline. 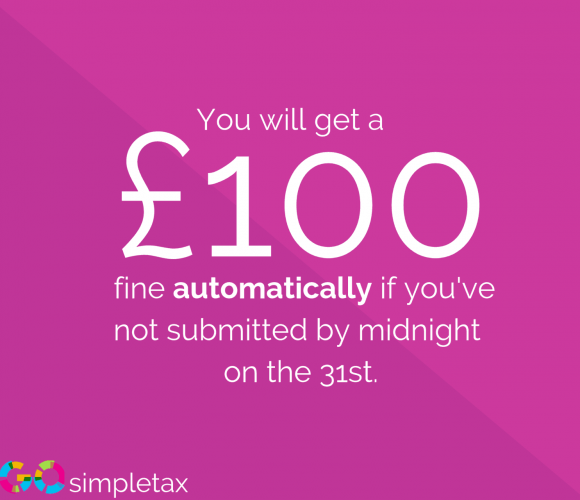 HM Revenue and Customs (HMRC) must receive your tax return and any money you owe by the deadline, which falls on the 31st January 2019 for all online tax returns.

You’ll usually have to pay a penalty if your submission is late. In some cases, you can appeal if you have a just reason for a late submission – but you must send your return or advise HMRC that you don’t need to file a return before you appeal.

Popular Articles
1. How to spot a fake HMRC letter 2. How Far Back Does A Tax Investigation Go? 3. What is the income tax personal allowance for 2020? 4. Do I need an accountant to do my tax return? 5. Tax Guidance For Airbnb Hosts